Happy Halloween! This update adds a costume pack and includes some minor changes. 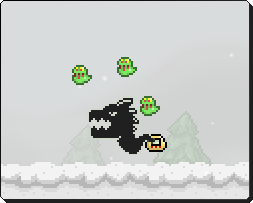 Celebrate Halloween ’18 with the new Halloween 2018 pack. This Flavor will cause slimy creatures known as Plasmo to haunt your Character, swirling about and tagging along. The harder these creatures laugh, the more transparent they become.

There’s a new plant in town and it’s ready to sell. The Telepathic Plant Salesman, or TPS for short, collects and sells common and rare items alike. The common items TPS sells are almost always the same, so it’s a good place to stock up on things you often need. The stock of rare items TPS offers, however, changes hourly. Check back often to see what TPS is selling!

This update includes new gameplay features from some Characters, player bonuses and other UX improvements.

These are a new type of floor slope that allow a player to enter from one side but not the other. The falling cactus in the Lost Desert has been converted to this type of slope to improve battle flow.

Old slopes could trap players and cause a world of hurt. The dynamic slope version allows for players to use it as a ramp from one side without getting trapped from the other side.

These new slopes not only open up attack options but also makes life easier for Characters with poor jumping abilities, such as Luck Monkey. Try to see how you can use this new type of slope to your advantage!

When using the Forge, the fusion window will reopen after fusing two items. If the combination items still exist after fusion, they will remain in the queue ready for consecutive fusions. These two changes greatly increase the speed and ease of using the Dream Forge.

This new feature rewards online players with +1 Token every 10 minutes. The longer you’re logged in, the more Tokens you’ll reap!

This release features a new Area, gameplay updates and welcome sign for Aeon, along with other new content!

A new gem has been unearthed in the distant Area known as South Island. They need help defending against an influx of Dipsy4000s.

Characters have been training hard! The base acceleration for most Characters has been greatly increased, giving them much snappier movement options. Champ, Luck Monkey, Gloobin and Doragon received the most notable acceleration changes.

Guard Glide – Movement options while guarding have also been improved with the Guard Glide. Holding a directional key while a guard is active will reduce ground drag, allowing Characters to slide slightly further than normal. The direction moved while blocking a hit can also be influenced by directional keys during both Normal and Perfect Guard.

This sign welcomes all to Aeon, displaying current information on its built-in display. The display showcases new features, events, costume packs and will sometimes a show special screen that allows users to earn a rare item by clicking the sign screen. Vigilant users can use this feature to earn hard to find items!

Badge ranks have been refactored and are easier to understand. Different metals are now used to determine badge rank. The metal denotes the rank of the badge, with a total of 10 ranks.

By continuing to use the site, you agree to the use of cookies. Learn more.